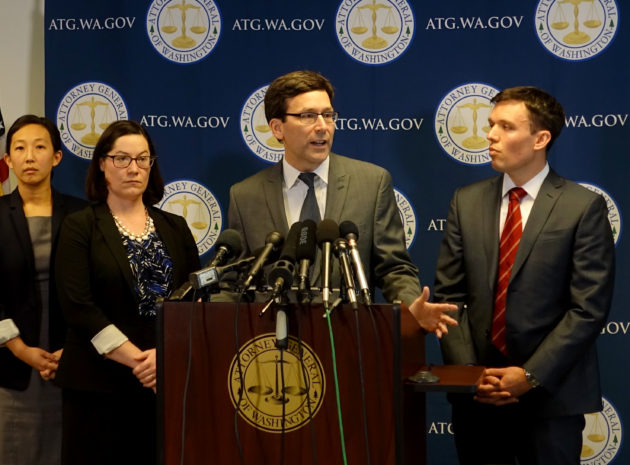 Bob Ferguson, Washington state’s attorney general, said that despite the significant changes to the President’s previous executive order, the new travel ban still suffers from legal flaws.
“The revised executive order does narrow” its impact, but “there is still harm,” Ferguson said in a news conference on Thursday. “This is effectively a Muslim ban.”
Attorneys general from New York and Oregon confirmed they are planning to join the lawsuit. Minnesota is already part of the challenge to Trump’s actions.
US District Court Judge James Robart issued a nationwide temporary restraining order blocking implementation of the original travel ban on February 3.
Trump signed a new executive order Monday banning foreign nationals from six Muslim-majority countries from entering the US for 90 days and banning all refugees for 120 days, but excluded green card holders and those with existing valid visas from the order.
The original ban included Iraq, but the new order does not. Ferguson said that change doesn’t pass muster.
Rather than a seven nation ban, it’s is only “now a six nation ban,” he said. “The language is virtually identical.”
The legal arguments against the original order still hold, Ferguson believes.
“There are still constitutional problems with core provisions” of the new executive order, Ferguson said. “It cannot be a game of whack-a-mole.”
According to Ferguson, Robart’s current temporary restraining order halting the original travel ban should block implementation of the new executive order as well.
“This is not a new lawsuit — we’re saying that underlying injunction is still under effect on core provisions (of the executive order),” Ferguson said.
The state will continue to make the case the ban discriminates against Muslims based off of Trump’s statements during the campaign and Rudy Giuliani comments about a legal Muslim ban, he added.
The state of Hawaii this week also challenged Trump’s new travel ban. A federal judge agreed to hear arguments on Wednesday — one day before it is slated to go into effect on March 16.
White House spokesman Sean Spicer said Thursday the executive order was consistent with federal law.
“We’re going to go forward on this,” Spicer said. “We feel very confident with how that was crafted and the input that was given.”
The Justice Department filed a notice with Robart on Monday, saying the administration believes the new executive order “falls outside of the scope” of Robart’s earlier ruling that blocked the original ban. The administration cited the substantial changes to the executive order, arguing that it “clarifies and narrows the scope of Executive action regarding immigration, extinguishes the need for emergent consideration, and eliminates the potential constitutional concerns identified by the Ninth Circuit.”
Announcing the new executive order Monday, US Attorney General Jeff Sessions argued that the ban was necessary because “we cannot compromise our nation’s security by allowing visitors entry when their own governments are unable or unwilling to provide the information we need to vet them responsibly, or when those governments actively support terrorism.”
CNN
Download WordPress Themes
Download WordPress Themes
Download Nulled WordPress Themes
Download Premium WordPress Themes Free
udemy course download free
download lenevo firmware
Download Nulled WordPress Themes
udemy free download
asksfrontjudgestateto block new Trump travel banWashington
You might also like
Turkey